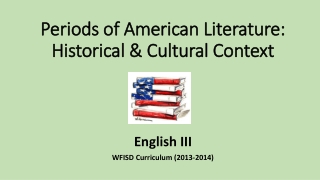 Periods of Christian Literature - . edificatory period 90-150 ce. i. characteristics a. written with purpose of

HISTORICAL CONTEXT - . 1865 13 amendment lincon after the civil war in 1865 was ratified the13amendment which abolished

Literary Periods in American Literature - . 28 august 2008. introduction. the following is an overview of the major

The Periods of British Literature

Historical Context - . the need for an improved warning paradigm was first informally discussed between nhc and coastal

Historical Context - . think about the time period of the story and things like technology, events, or issues related to