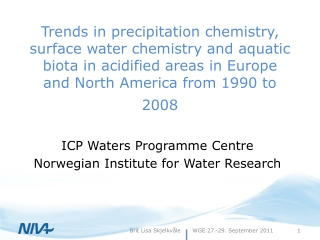 Trends in precipitation chemistry, surface water chemistry and aquatic biota in acidified areas in Europe and North America from 1990 to 2008. ICP Waters Programme Centre Norwegian Institute for Water Research. Aim of the report. Centre of Expertise for Waters - . connecting scotland’s water research with policy www.crew.ac.uk. funded by the

ABC Waters Programme - . the programme involves the transformation of our concrete drains, canals and reservoirs into

ABC Waters Programme - . projects for implementation in the next 6

Tor Håkon Sivertsen The Norwegian Crop Research Institute - Reflections on the theme of classifying, documenting and

The Norwegian Centre for ICT in education - . main goals for the centre. better use of ict to: improve educational