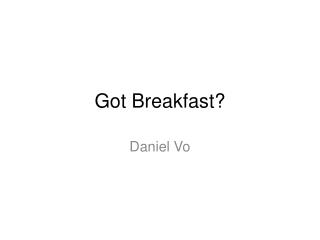 What’s for Breakfast? - . mrs. tyrrell and mrs. manuel’s class decided to see if students eat different things on a

Breakfast - . breaking the fast!. survey. who eats breakfast on a regular basis? what kind of things do you eat?. why is

Mrs. Jessica Park - Attendance. school starts each day at 7:30. we do lots of work each day and missing just a day can

Breakfast - . thank you for offering breakfast at your school! school breakfast can: provide a morning meal for students

Breakfast and Health - . breakfast is the most important meal of the day. support or refute this claim. nutrients. people

Breakfast - . what does the word ‘breakfast’ mean?. it means break fast . over night you do not eat or drink which is

healthy breakfast - . participating classes are bvj-kh and bej-m. bvj-kh. what do we like to eat ? – our breakfast

Welkom to COSMOS! - . the world of molecules. chemistry at the nano-scale. cosmos uci, summer 2008. hour. monday.