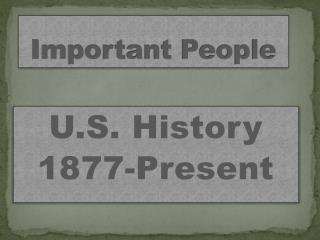 IMPORTANT PEOPLE - . directions:. 1. write the description of the person on the lined side of your index card. identify

Important People/Psychologists - . who had the first lobotomy which gives psychology info on part of the brain that is

Other important people - . (your book didn’t mention). question: where is the largest store of islamic and byzantine

Chapter 20 Important People - . an internationally known artist, his ambition was to paint cowboys, indians, and frontier

Important People in History - . social studies sol review for kindergarten and first grade. in this presentation you will

Important People and Events - . kim johnson. theft of the mona

The most important “ P ” : People - . how multi-dimensional relationships lead to customer valued innovation,