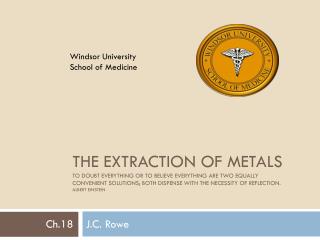 Windsor University School of Medicine. The extraction of metals To doubt everything or to believe everything are two equally convenient solutions; both dispense with the necessity of reflection. Albert Einstein. Ch.18 J.C. Rowe. Occurrence of metals in nature. Ch.15 J.C. Rowe - Windsor university school of medicine alcohols, acids &amp; esters to know what is right and not to

Ch 18 - . gene regulation. consider: a multicellular organism (pliny) do each of his cells have the same genes?. yes,

Ch 18- Classification - . why do biologists organize living organisms into groups that have biological meaning? study the

Ch:18 Photography - . chris angerhofer. photography staff. separate but one working for the same common purpose all for