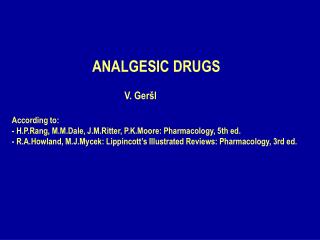 ANALGESICS - . pain management. what is pain ? a protective mechanism to warn of damage or the presence of disease

WHAT ARE THE COMMON SIGNS & SYMPTOMS OF TRAMADOL ADDICTION? - Opioid analgesics such as tramadol are known to be

OPIOID ANALGESICS - . dr. naila abrar. learning objectives. after this session, you should be able to: classify opioids

OPIOID ANALGESICS - . anton kohút. popy seeds. although it is almost certain that the analgesic effects of an extract of