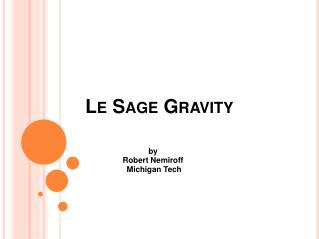 Le Sage Gravity. by Robert Nemiroff  Michigan Tech. Physics X: About This Course. Officially "Extraordinary Concepts in Physics" Being taught for credit at Michigan Tech Light on math, heavy on concepts Anyone anywhere is welcome No textbook required Sage - At cleosolutions.ch we provide the best in class service along with authentic and reliable sage 50 software so

GRAVITY - . a brief timeline of the discovery of gravity. aristotle. 4 th century bc. there is

Gravity - . chapter 7. objectives. be able to explain to the motions of the bodies in the solar system using newton’s

Gravity - . section 1-2. gravity. force that attracts all objects towards each other measured in newtons causes objects

Gravity - . what keeps you grounded!. $ challenge!. the falling dominoes. pass out gravity notebooks get in groups and

Gravity - . gravity: the force that objects exert on each other because of their masses. weight: mass plus the gravity

Gravity - . what is gravity?. bellringer. pick up a brain pop: observation chart from the front table. you have five