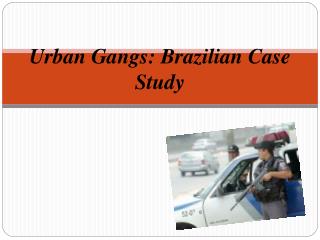 Gangs: A Big Problem in Society - Gangs: a big problem of society introduction. gangs are a big part of society today. it

Hispanic Gangs - . understanding the marginal man or woman. the beginnings of hispanic gangs. we can say that in some

Urban Municipal Water: A Case Study of Chicago - . kate paulson. why did people settle in chicago?. -chicago sits on a

YAL - Gangs - . cayla ramos. dedicated to. • the athlete who left school to be involved in a gang • the immigrant who

GANGS AND CRIME - . origin of gangs . gangs have been in america since the 19 th century. q: what have gangs nearly

Children and Gangs info Training - . how to help kids stay out of gangs. table of contents. click below to go to section

Urban Transportation, Land Use, and the Environment in Latin America: A Case Study Approach - . lecture 2. urban