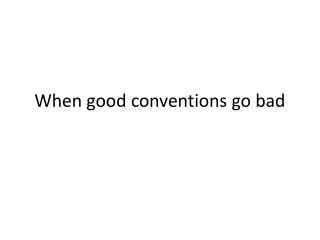 Troubleshooting – When good computers go bad! - . connection problems. check your cables here are the cables on the

When Presidents Go Bad: - . congressional investigations and impeachments as checks against presidential power.

Why good companies go bad - When business conditions change, the most successful companies are often the slowest to

WHEN GOOD CODE GOES BAD! - . a showcase of modern programming mishaps (sensepost 2006). introduction. who we are..

When Special Needs Trusts Go Bad - All materials in this presentation are copy written and are for personal use only. any

When Good Brains Go Bad Behavior and Disease: Depression and Addiction - . shp – neurobiology of development and