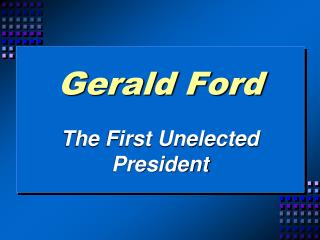 Gerald Ford - . served as president from 1974 -1976 only man to serve as vp and president without being elected. dealing

President Gerald Ford - . unable to accomplish much while in office pardoned nixon for watergate (unpopular) many felt he

Gerald R. Ford Republican - . ford’s background … u of michigan football star ww ii - u navy 12 terms in the house of

Gerald Ford and Jimmy Carter - . “unless both sides win, no agreement can be permanent.”. “i am a ford, not a