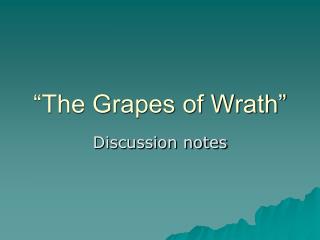 â€œThe Grapes of Wrathâ€. Discussion notes. Chapters 1-5. Two key characters weâ€™ve met so far: Tom and Casy . Weâ€™ll look at Tom more closely later. It should strike you that Casyâ€™s initials are J.C. He is certainly a Christ-like figure in this book. Our King Is Marching On #171 vv 1,2 - . mine eyes can see the glory of the presence of the lord: he is trampling out the

Being Thankful - . romans 1:18-21. 18 for the wrath of god is revealed from heaven against all ungodliness and

TANNINS - . tannins tannins is a substance found naturally in many different plants, most in grapes and tea leaves

The Grapes of Wrath - . john steinbeck.

Fruit Basics - . types of fruits. from appetizers to dessert, fruits add texture , nutrition , color , and flavor to any

After Life for the Righteous: What? - . kingdom of heaven heaven (paradise) new heavens, new earth. after life for the