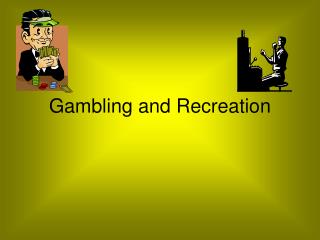 Gambling and Recreation. Gambling Introduction. The National Gambling Impact Study Commission (NGISC) warned that gambling is growing so fast that it may be surpassing the ability of federal and state authorities to control it. (from CQ researcher). REGULATION and RECREATION - . a look at the child care division rules regarding outdoor play. when children play in

Autism and Recreation: - . getting off the bench. presented by: maggie reilly, pt., mba, director, occupational and

Leisure and recreation - . wk 2 contemporary studies. the physical activity continuum. leisure is in the middle of the

Parks And Recreation - Time to move on from f1 games, the future has arrived! don your oculus gear and race your drones

Recreation - . que’st ce que tu aimes faire? what do you like to do?

RECREATION - Analysis. an. on. recreation. the. questions. what do. what are the. what is. t he potential?. m arket