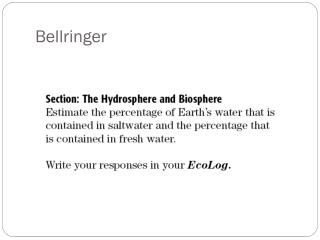 Bellringer. The Hydrosphere. The hydrosphere includes all of the water on or near the Earth’s surface. This includes water in the oceans, lakes, rivers, wetlands, polar ice caps, soil, rock layers beneath Earth’s surface, and clouds. The Water Cycle.