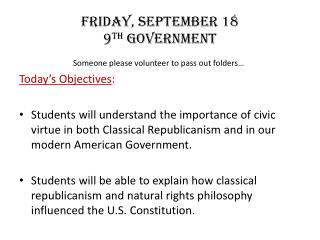 Friday, september 18 9 th Government. Someone please volunteer to pass out folders… Today’s Objectives : Students will understand the importance of civic virtue in both Classical Republicanism and in our modern American Government. Friday, September 18 th Science - . warm-up - clear your desks except for what you’ll need: something to write with

September 18 th - . welcome!. as a safa member you will.. have access to recruiters from 16 different companies including

Friday 14 th September 2012 - . in todays lesson we were introduced to our new coursework. we looked at the dida wildcare