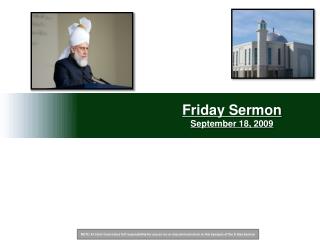 Friday Sermon September 18, 2009. Summary. Importance of Jummah as mentioned in The Holy Qur’an Hadith August sayings of the Promised Messiah (on whom be peace) Importance of Durud Friday is indeed Eid. Huzur ( aba ) said praise be to God,. Friday Sermon Slides August 28, 2009 - . summary. the holy month of ramadan the concept of nearness to allah and the

Friday, September 18 th Science - . warm-up - clear your desks except for what you’ll need: something to write with