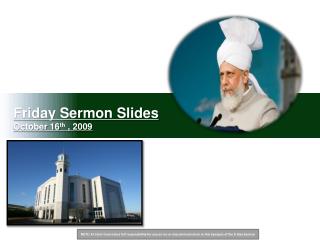 Friday Sermon Slides October 16 th , 2009. Summary. Huzur gave a discourse on the Divine attribute of Al Matin (The Strong). Al Matin Allah came to the help of persecuted Muslims at the time of the Holy Prophet ( peace and blessings of Allah be upon him) Friday Sermon Slides August 28, 2009 - . summary. the holy month of ramadan the concept of nearness to allah and the

By: Adrienne Gedeon Allison Gedeon 4/27/2009 - Lawrence kohlberg and carol gilligan: a study on moral development. by: