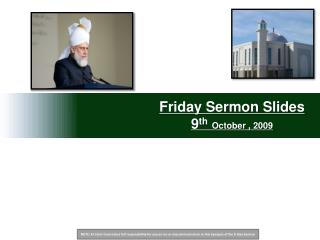 Friday Sermon Slides 9 th October , 2009. Summary. Huzur ( aba ) expounded upon the Divine attribute of “Al- Qawi ” – All Powerful, The Mighty None other than God Almighty has the power to help anyone The might of Allah commands that He should be truly loved Summer Program in Field Biology - . through the university of texas at san antonio. may 26-june 19, 2009 explore the

Welcome To Pastor Garry Clark’s PowerPoint presentation from the July 30 th sermon: - Anger! … how not to lose your

Jump Start: October 5, 2009 - . draw a conclusion from the following statements. if it is raining, the temperature is