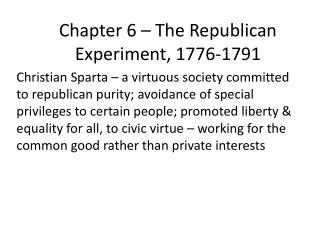 Chapter 6 – The Republican Experiment, 1776-1791. Christian Sparta – a virtuous society committed to republican purity; avoidance of special privileges to certain people; promoted liberty & equality for all, to civic virtue – working for the common good rather than private interests. The Republican debates - Highlights from the fifth official republican presidential

2.1 The Need for Ether 2.2 The Michelson-Morley Experiment 2.3 Einstein’s Postulates 2.4 The Lorentz Transformation

Computers in Chemistry - . dr john mitchell university of st andrews. 1. why?. working with experiment to test our

The ARGO-YBJ experiment: results and perspectives - . paolo camarri on behalf of the argo-ybj collaboration. university

CHAPTER 12: - . dna and rna. review. what organelle is known as the “control center” of the cell? what structures are