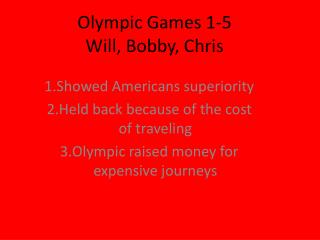 Olympic Games 1-5 Will, Bobby, Chris. Showed Americans superiority Held back because of the cost of traveling Olympic raised money for expensive journeys . Olympic Games. American support of the Olympics led the international Olympic committee. To award the nation