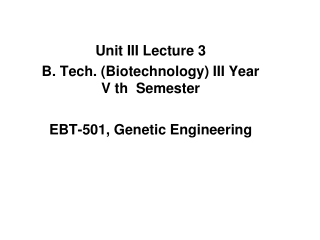 Unit 3: Genetics - . chapters 12. objectives. understanding of the formation of gametes &amp; the role of dna

UNIT B-3 - . in multiple choice testing: a negative choice is more likely the answer than a positive one usually the

Unit 2 B.3 - I.reading comprehension questions . 1.what causes iron loss in human body?2.when do we feel that we are in