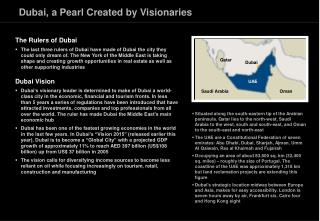 Dubai, a Pearl Created by Visionaries. The Rulers of Dubai The last three rulers of Dubai have made of Dubai the city they could only dream of. The New York of the Middle East is taking shape and creating growth opportunities in real estate as well as other supporting industries Dubai Vision The Rulers of Egypt - . coach parrish oms chapter 3, section 2. a leader emerges. hatshepsut was one of a few women

The Rulers of Mesopotamia - . sumerians 3000bce. leadership: lived in independent city states each had its own god often

The most significant rulers of Estonia - . before estonia gained its independence in 1918 , it had been a part of

Absolute Rulers of Russia - . mr. green . why this matters today. this information is important because many russians

ABSOLUTE RULERS OF RUSSIA - . the first czar. 1533: ivan the terrible becomes king of russia struggles for power with

Absolute Rulers of Russia - . peter the great &amp; catherine the great. 5 reasons why russia was backward/isolated.