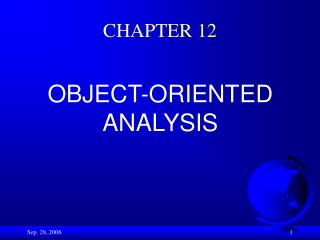 CHAPTER 12. OBJECT-ORIENTED ANALYSIS. Object-Oriented Analysis. OOA is a semiformal analysis technique for the object-oriented paradigm There are over 60 equivalent techniques Today, the Unified Process is the only viable alternative During this workflow The classes are extracted.