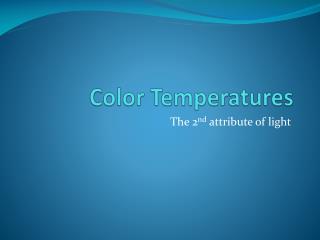 Color Temperatures. The 2 nd attribute of light. Approximate Color Consistency. Under normal conditions when we look at subject matter such as this, approximate color consistency comes into play and automatically makes a perceptual adjustment for these different sources of light . Temperatures - . prepared by claudia doria and terra myers. this is sandy. sandy feels cool. how does sandy feel?. she

LOW TEMPERATURES - . low temperatures. when the temperature is reduced, the activities of most micro-organisms are slowed

SERVING TEMPERATURES OF DRINKS - . subject - bar and bar management. there is a generally accepted serving temperature

Estimates of past temperatures - . who’s driving?. total “forcing” based on temperature estimates. changes in solar