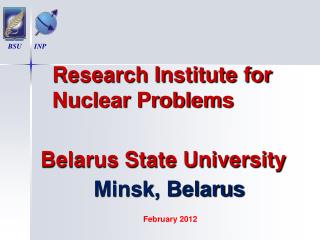 Overview of the Principles and Challenges of Fusion Nuclear Technology  - . one of a number of lectures given at the

A STRATEGIC APPROACH TO COMPETITIVENESS: SCOPE, PRIORITIZATION AND PROCESS PRESENTATION OF THE REPUBLIC OF BELARUS SOF

Belarus Structure of the Course - . i. basic facts ii. two definitions of national identity that can be applied to

BSUnet : what it was, is and is to be - . yury varatnitski , director of the bsu it center vorotn@bsu.by . history of bsu