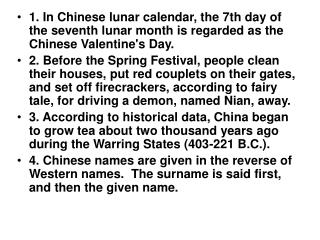 1. In Chinese lunar calendar, the 7th day of the seventh lunar month is regarded as the Chinese Valentine's Day. 2. Before the Spring Festival, people clean their houses, put red couplets on their gates, and set off firecrackers, according to fairy tale, for driving a demon, named Nian, away. 40 ways to create peace of mind - Peace - mind. if you just stopped thinking for a while and sat back to reflect on your

The Role of International Business - . to buy, sell and trade goods and services across national boundaries. did you

Reading Street - . unit 4 week 6. what is changing in our world?. how can a surprise be a treasure?. what treasures can

Home Based Business Loans from Merchant Advisors - Getting quick funding for a startup is never easy, and for a