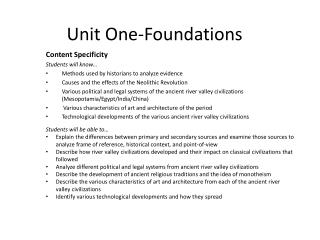 Unit One-Foundations. Students will be able to… Explain the differences between primary and secondary sources and examine those sources to analyze frame of reference, historical context, and point-of-view UNIT ONE Theoretical Foundations - . chapter one introduction to organizational constructs. preface. according to modaff

Unit One: Foundations of government - . what is government?. government: the institution through which a society makes

PART ONE - FOUNDATIONS - . introduction to management. chapter 1 overview. what is management? levels of management the

PART ONE Foundations - . 1. i ntroduction to advertising. questions?. what is advertising? what are the roles/functions

UNIT 1 Foundations - . chapter 1 finding your way in god’s world. science isn’t what it used to be…. open up to the