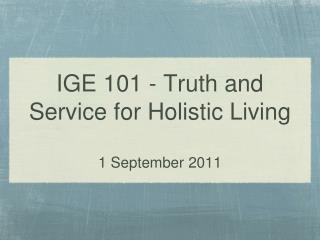 IGE 101 - Truth and Service for Holistic Living 1 September 2011. How Good People Make Tough Choices. By Rushworth M. Kidder (1995) Introduction to ethical conflicts and their resolution. Review. We all have tough choices to make– between right and wrong = moral temptations Truth and Service for Holistic Living - . the seven habits of highly effective people by stephen covey. who is someone

Holistic Living - Merkaela provides products that are meant for holistic living. we design and made our products using

Thursday September 1, 2011 - . starter: in your journal tell about a piece of advice that someone gave you. what was

Living Well 101 - . oregon living well program. what is self-management? the tasks that individuals must undertake to

Objectives - . to emphasize the importance of not missing the diagnosis and not under-reporting the events to remind our