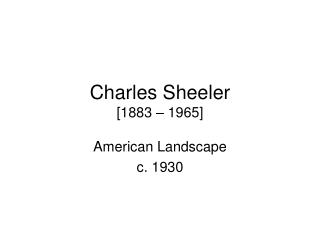 Charles Sheeler [1883 – 1965]. American Landscape c. 1930. "Works of art are more than mere ornaments for the elite, They are primary documents of a civilization. A written record or a textbook tells you one thing; but art reveals something else. Charles Darwin - . charles darwin. 1809 - 1882 most influential contributor to thoughts about evolution the origin of

SELECTED CASE LAWS - CCS (CCA) RULES, 1965 - . purpose to sum up the statutory provisions and the rules prescribing the