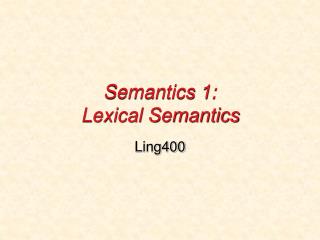 Semantics 1: Lexical Semantics. Ling400. What is semantics?. Semantics is the study of the linguistic meaning of morphemes, words, phrases, sentences. Dictionary definitions. Relating Static and Dynamic Semantics - . cos 441 princeton university fall 2004. motivations. we want to know that when

Applying Semantics to Service Oriented Architectures - . oasis symposium 2006 the meaning of interoperability 9-12 may,