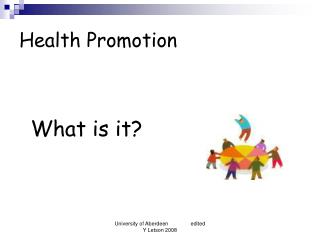 Health Promotion. What is it?. Health Promotion Origins. Focus of this health improvement effort has shifted from environments, systems and populations to individual based approaches and back again.

Theories and Models in Health Promotion: Introduction - . presentation by irving rootman to sfu class on principles and

HEALTH EDUCATION AND HEALTH PROMOTION - . objectives: you students will be capable. to differentiate between health

Health Education/Health Promotion - . click on the video to watch ‘texting while driving’. what message is being put

HEALTH PROMOTION - . banyard : psychology in practice: health chapter 6. health promotion. in this module we will be

Introduction to Health Promotion and Population Health - . presentation by irving rootman to sfu class on principles and

Health Promotion and Ethics - . in order to promote