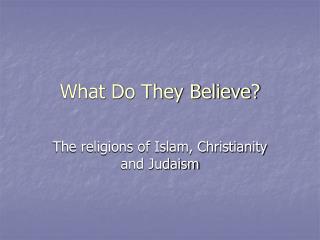 What Do They Believe?. The religions of Islam, Christianity and Judaism. Islam. The person who began the religion called Islam is Muhammad. His followers are called Muslims. Islam Continued…. What do they say?? - . too embarrassed he didn’t listen/stop pain noises smells panic attacks being judged too busy.

Jews and Judaism What do they believe? - . artefacts tallit and kippah. the tallit is the prayer shawl the kippah is the

Rootkits What are they? What do they do? Where do they come from? - . introduction. bill richards adjunct professor at

My, How They Do What They Do!!! - . making laws… making sausage…. politics outweighs “the public good” the “my

What did they do!!! - . by: rayhana chessa maharani (5a). positive sentence. he played golf last night…. . negative

What they do - . what they do. patient’s stories. isatou , burned in an accident at

What do Hindus Believe? - . introduction. it goes back at least 5000 years gradually developed over 1000 years it’s a

What do you believe about learning? What do your students believe? - . read. consider how you can encourage a growth

Rankings: What do they matter, what do they measure? - . anne mcfarlane august 18, 2010. outline. healthcare statistics

What are they? What do they do? Why are they useful? - . virtual learning environments. what is a vle ?. a tool for

Actuary – what they do - . “risk analyst” – uses statistics and probability theory to quantify risks. insurance

WHAT DID THEY DO? - Presented by: cintya a.w.p. what did they do?. positive sentence. tiffany studied english last night.

What Did They Do? - . by : sallsabila fajar isnaini va. they played badminton 2 hours ago. angela didn’t study last

What did they do - . oleh:jalu,reza. i played guitar yesterday. i didn’t play basketball yesterday. what did you do

What did they do - . by : rahma marwah hasyim vd. positive