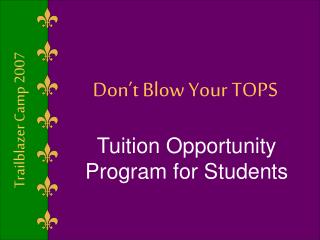 Don’t Blow Your TOPS. Tuition Opportunity Program for Students. TOPS Award Levels. Opportunity Award Performance Award Honors Award Tech Award. Citizenship. A student must be a U.S. citizen, or a permanent resident who is eligible to apply for citizenship. Residency. Temple Sheckles Available In The Hallway! - . romans 3:1 what advantage then hath the jew? or what profit is there of

The Gas Laws - . describe how gases behave. can be predicted by the theory. the kinetic theory amount of change can be

The OIL Group of Companies - . www.oil.bm www.ocil.bm. “tools for risk transfer” presentation to university of

Trauma - . originally either a direct physical blow to the body or the resulting damage a surgeon’s concept.