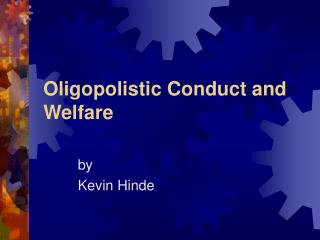 Oligopolistic Conduct and Welfare. by Kevin Hinde. Welfare and (Tight) Oligopoly. To understand the welfare implications of oligopoly we need to examine interdependence between firms in the market. Welfare depends upon the number of firms in the industry and the conduct they adopt. Welfare and justice - . econ4620 alexander w. cappelen. introduction. why do we levy taxes? to improve the allocation or

Poverty and Welfare - . by callie eastis. history. at first, the u.s. used british poor laws that made a distinction

Health and Welfare - . william james mayo 1928. “the aim of medicine is to prevent disease and prolong life, the ideal

Price-Output Determination in Oligopolistic Market Structures - . we have good models of price-output determination for

Internet Conduct and You - . proper internet and social media usage 2012. internet usage while on premise. board policy

Internet Conduct and You - . proper internet and social media usage 2013. internet usage while on premise. board policy

ETHICS AND SCIENTIFIC CONDUCT - . moral frameworks hold that values are universal yet permit leeway in