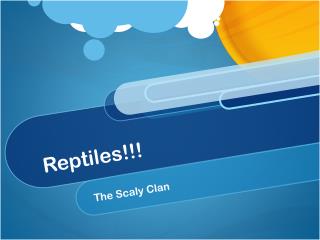 Reptiles - . reptilia. reptiles are the evolutionary base for the rest of the tetrapods . early divergence of mammals

Reptiles - . limited competition for the insects and plants that could be used as food on the land. an increase in

Reptiles - . adapted for life on land. ectothermic all reptiles are ectotherms meaning “cold-blooded.” think! – how

Raging Reptiles! - . click here!. can any of you name these three reptiles? objective: today we are going to learn how to

Reptiles - . evolution of  reptiles:. reptiles were 1st vertebrates to make a complete transition to life on land (more

Reptiles - . by andre and austin. reptilians. today we will talk about reptiles ( reptilians.) other people, like

Reptiles - . diversity. diversity found on every continent but antarctica mainly found in tropics and subtropics produce

Reptiles: The First Amniotes - . amniotic egg. have embryonic membranes that protect the embryo from desiccation, cushion

Reptiles - . snakes &amp; lizards. reptile facts. there are 6,800 reptile species on earth the major groups are