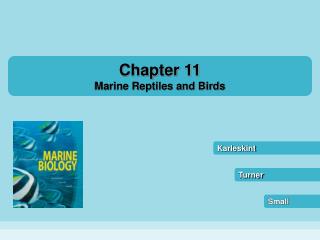 Chapter 11 Marine Reptiles and Birds. Marine Reptiles. Ancestors of modern reptiles appeared about 100 million years ago. Reptiles adapted for success on land, then used the same characteristics to return to the sea and gain success there as well Modern-day reptiles include: crocodilians Marine Reptiles, Birds, and Mammals - . chapter 9b. biology of marine mammals. little is actually known about many marine

Chapter 32: Reptiles and Birds - . section 1: reptiles. what is a reptile?. reptiles are vertebrate animals that have