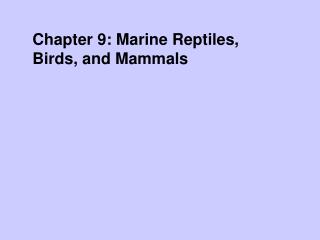 Chapter 9: Marine Reptiles, Birds, and Mammals. Vertebrates 350 m.y.a. vertebrates invaded land Decendents of bony fish Land vertebrates had to adapt to harsher conditions on shore Tetrapods had to develop lungs that allowed for absorption of oxygen directly from air.

Chapter 8 - . marine fishes. the first vertebrates. fishes appeared more than 500 million years ago evolved from an

Math Review - . the pet store received a new shipment of birds. they have 9 birds to put into 3 cages. which number

What is an example of a Lagomorpha? seal goat rabbit fox - What type of animal has the highest metabolism, thus the

Understanding Wildlife Management - . wild birds and mammals are among our most valuable renewable natural resources

Mammals are characterized by each of the following EXCEPT - . mammary glands. hair. endothermy. three-chambered hearts. a

USMC - . past…. present…. future…. overview. establishment of the marine corps marine corps history missions of the

REPTILES &amp; AMPHIBIANS - . the rise of amphibians (devonian period) a. amphibians have a body plan and mode

Mammals - . evolution and characteristics. mammals belong to the class mammalia, which includes 4000 species most