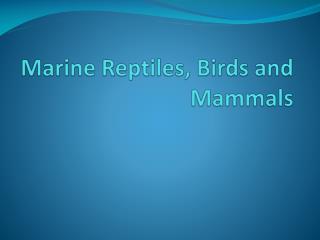 Marine Reptiles, Birds and Mammals. Marine Reptile Characteristics. Land vertebrates are called tetrapods because they have four limbs designed for locomotion on land. They have lungs and breathe air, and, except for amphibians, they have reproductive systems that are not tied to water .

Birds and Mammals - . ms. youngblood. birds . all birds have feathers have the ability to fly class: aves latin word for

Marine Reptiles - . reptiles. first to move to land then some came back to water 4 orders: snakes &amp; lizards