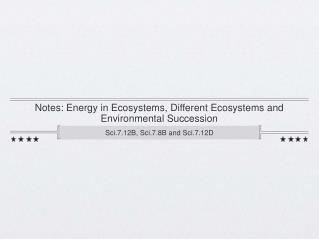 Notes: Energy in Ecosystems, Different Ecosystems and Environmental Succession. Sci.7.12B, Sci.7.8B and Sci.7.12D. What is an Ecosystem?. An ecosystem is composed of all the living and nonliving things that interact in a particular area. Ecological Succession - . examples of changing ecosystems. a forest could have been a shallow lake a thousand years ago.

Chapter 55 - . ecosystems. overview: observing ecosystems. an ecosystem consists of all the organisms living in a

Ch 5 What do we know about ecosystems? - . an ecosystem consists of all the organisms ( biotic ) in a community and the

Ecosystems, Resources, and Conservation - . why should we care????. http://www.youtube.com/watch?v=qd20zkrie7o.

Coral Reef Succession - . ecological succession. the progressive change in the species composition of an ecosystem. new

Ecology of Populations - . essential knowledge 2.d.1:. all biological systems from cells and organisms to populations,