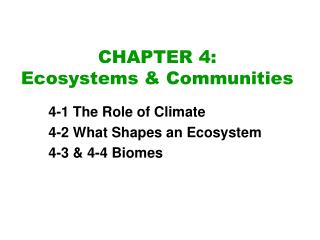 The Development of a Quality Improvement Network for Addiction Therapeutic Communities - Natalie wood and paul goodman.

Chapter 54 - . ecosystems. overview: ecosystems, energy, and matter an ecosystem consists of all the organisms living in

Ecosystems: Feeding Relationships - . unit 8, part 1. interactions among organisms. picture a lake and all the organisms