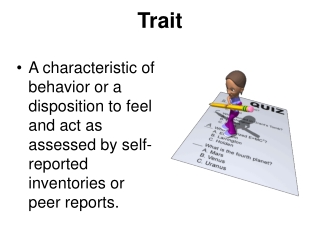 Trait. A characteristic of behavior or a disposition to feel and act as assessed by self-reported inventories or peer reports. Trait Theories of Personality. They believe that we can describe people’s personalities by specifying their main characteristics (traits). Trait Theory: The Big 3 or 5 - Trait. a relatively context-independent pattern of behavior, emotion and interpretation.

Quick Review – Defense Mechanism - . these mechanisms are used by ego for reducing anxiety by distorting reality

Inheritance and Genetics - . quiz. 1. both parents of a siamese cat have green eyes. their offspring also have green

Adaptations &amp;You! - . you are made of traits. what is a trait?. a trait is …. a distinct characteristic (hair

Association Design - . begins with known polymorphism theoretically expected to be associated with the trait (e.g., drd2

State vs Trait - . constructs. project question 4. does your test measure a state or a trait?. criterion vs norm

Indiana Jones - . think of a character trait of indiana jones. tell your neighbor this trait, and give one piece of

Human traits and gene therapy - . a pedigree is a graphic way to look at a trait between ancestors. it shows how a trait

Pedigrees - . it is a diagram that shows how a trait is inherited through several generations. squares = males circles =

Leadership H.L. Trait theories - . trait theorists believe that different managers and leaders have to be who they are

Warm up - . a brown eyed parent and a blue eyed parent produce children with brown eyes. which eye color is the dominant