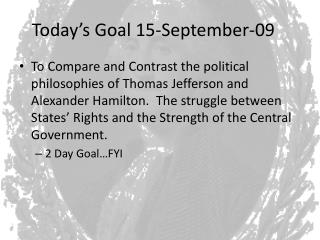 Today’s Goal 15-September-09 . To Compare and Contrast the political philosophies of Thomas Jefferson and Alexander Hamilton. The struggle between States’ Rights and the Strength of the Central Government. 2 Day Goal…FYI. Quick Review…. Articles of Confederation Daniel Shays Presentation 09 - Studies in ephesians. presentation 09. the structure of the book. be what you are in christ. see what

The Focus of Today ’ s Presentation - English language learners and the next generation science standards:  using the

Goals for Today ’ s Presentation - The good, the bad, and the ugly: kuali coeus model office at indiana university 2011

September 09, 2010 - . what is a governing board?. a decision-making body within each school that assists in defining