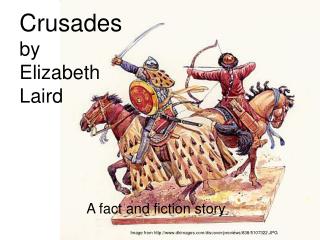 Crusades by Elizabeth Laird. A fact and fiction story. Image from http://www.dkimages.com/discover/previews/838/5107322.JPG. The Crusades , a story about a holy war, where two boys of opposing faiths are to confront each other in this war. Elizabeth Laird &amp; Helene Stebbins - P-20 longitudinal data systems what is the information we need, how do we get

By: Elizabeth Rumble - . what do you see? what is similar? what is different?.

By Elizabeth Ferris - Get bent out of shape. by elizabeth ferris. once there was a little rhombus named roofus. he liked

By Elizabeth Spearce - The sign of the beaver. by elizabeth spearce. chapters 1-10. why is matt left behind at the cabin?

Crusades - . military expeditions aimed at reclaiming the holy land from the muslims. nine total. eight plus a

Crusades - . modern literature has used crusade in reference to all wars of religious character middle ages: referred to

Crusades - . day one. height of church power. by the late 12 th century, the pope’s had reached the height of their

Crusades - . fight for the holy land. byzantine empire lost the asia minor to the muslims jerusalem was the main concern

Crusades - . the crusades. 11 th -13 th centuries european christians carried out a series of military expeditions to

Crusades - . crusades. the crusades were expeditions undertaken, in fulfillment of a solemn vow, to deliver the holy

Crusades - . during the middle ages the catholic church had risen in power. after the fall of rome, the eastern portion