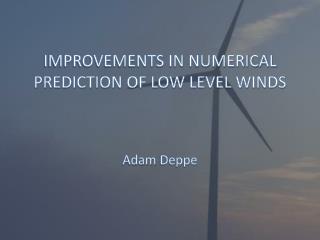 IMPROVEMENTS IN NUMERICAL PREDICTION OF LOW LEVEL WINDS. Adam Deppe. Motivation. U.S. Department of Energy (DOE) goal of having 20% of the nation’s electrical energy from wind by 2030 Adam - . primal parent of our race taken from mapping human history by steven olson. counting our ancestors. one

Adam - . by kurt vonnegut. theme. the value of cultural and personal perseverance. plot

Adam, Adam, Adam, and Adam: The Cultural Construction of a Learning Disability - . a model for your first paper in the

Adam Goldfein - . every saturday morning, hundreds of thousands of people religiously tune in to discuss car