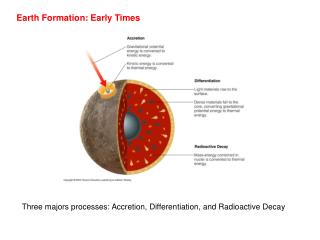 Chapter 3 - . geology of the oceans. world ocean. primitive earth and formation of the ocean early earth thought to be

Earth’s Surface: Unit 1 - . the big idea: continuous processes on earth’s surface result in the formation and

17-2 Earth’s Early History - . formation of earth. evidence shows that earth was not “born” in a single event. the

Inside the Earth - . review of density… density is an expression of the relative heaviness of a substance mass per unit

The Roman Army - . every other slide in this show is in “times new roman” font. . by oliver w. the roman

Hypothesis of early Earth - . about 4.4 billion years ago, earth might have cooled enough for the water in its atmosphere

Early Origins - . chapter 19.1 &amp; 19.3. how did life begin?. the ideas presented here are hypotheses. the evidence

Explorations of the Universe - . how did the earth and moon form?. ideas about the early earth have run hot and cold

Inside the Earth - . review of density… density is an expression of the relative heaviness of a substance mass per unit