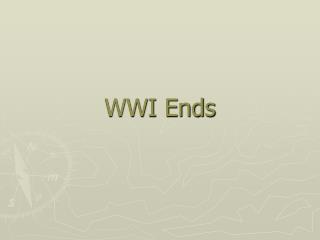 WWI Ends - . the end of fighting . u.s. enters the war as russia is leaving germany refocuses on the western front

WWI - The road to the great war. wwi. imperialism. as america has been building its empire, so have other nations germany

WWI - . the great war the war to end all wars the war to make the world safe for democracy. what mr. earhart wants

WWI - . is war ever justified? if so which nations were justified in going to war?. to look deeply at wwi we have to

WWI - . chapter 27. “civilization has climbed above such perils; the interdependence of nations in trade and traffic,

WWI - . the stage is set for war. nationalism. one force at work that would propel europe into war was nationalism or

WWI - . around the world. warm up. what were the 4 causes of wwi? a =main what were some of the new weapons used in wwi?

WWI - . when world war i finally began, both sides expected it to last only a few months. but it went on for about 5

WWI - . part i. what do these 3 things have in common?. corrupt government dangerous neighborhoods bad marriages they

WWI - . congress approves declaration of war, but what about getting the american people behind it? wilson ran for

WWI - . wwi by : tanner jones. timeline of 1914. archduke francis ferdinand and his wife are assassinated by a serbian

WWI - . 1914-1919 by bryan kay. the battle of verdun. verdun was a military stronghold with thirteen concrete forts dug

WWI - . the alliance system &amp; the causes of war. who’s who in the alliances. the central powers/the triple

WWI - . the short version: who, what, when, where, why. factors that caused wwi. wwi was caused by the combination of 4