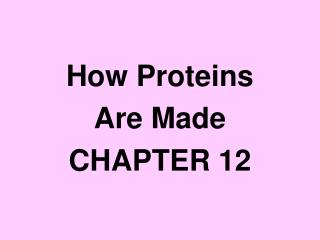 How Proteins Are Made CHAPTER 12. DNA, genes, chromosomes. How does a chemical control so much?. Intro to DNA Video. http://www.youtube.com/watch?v=bVk0twJYL6Y&feature=youtube_gdata_player Chapter 21 A Dividing Nation - . read section 21.1 page 285 write the questions and answers in your notes what issue

Chapter 10: Transcription in Bacteria - . few proteins have had such strong impact on a field as the lac repressor has

Chapter 11 - . membrane transport of small molecules and the electrical properties of membranes. i. principles of

Chapter 5 - . electrons in atoms. greek idea. democritus and leucippus matter is made up of indivisible particles dalton

ARE YOU MADE OF STARDUST ? - . an integrative study leading to an understanding of nature. chapter one!. stargazing