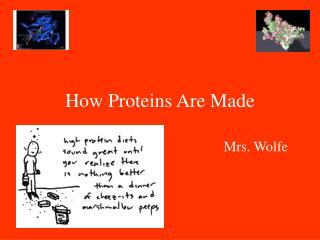 How Proteins Are Made. Mrs. Wolfe. DNA: instructions for making proteins. Proteins are built by the cell according to your DNA What kinds of proteins are in your body? Eye color, hormones, enzymes, poisons??!! Where do we get these proteins?. Proteins are made on the ribosomes!. Chapter 6 Proteins in Action - . 1. hemoglobin is a multisubunit allosteric protein that carries o2 in erythrocyte. 1.1

9.1 The Link between Genes and Proteins - . chapter 9 gene expression and gene regulation at the beginning of the 20 th

Membrane Structure and Function - . plasma membrane. is the boundary that separates the living cell from its nonliving