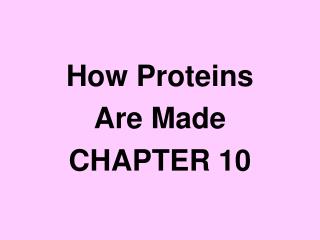 Chapter 17 - From Gene to Protein - . now that we know how the genetic design information that codes for all the

Chapter 17 From Gene to Protein - . question?. how does dna control a cell? by controlling protein synthesis. proteins

Chapter 17 - . from gene to protein. overview: the flow of genetic information. the information content of dna is in the

Chapter 6 Proteins in Action - . 1. hemoglobin is a multisubunit allosteric protein that carries o2 in erythrocyte. 1.1

Chapter 4: The Earth’s Interior - . chapter 4: the earth’s interior. what percent of the earth’s total volume is

9.1 The Link between Genes and Proteins - . chapter 9 gene expression and gene regulation at the beginning of the 20 th

Chapter 10 - . atomic physics. the quantum hypothesis. by the end of the 1800’s, physics had made significant progress.