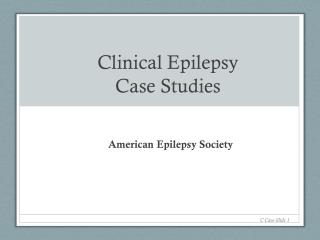 Clinical Case Studies - . urine and stool cultures. project- clinical diagnostics. each group of two are a team. you will

Clinical Epilepsy - . www.neurology.ufl.edu/epilepsy. definition: the clinical manifestation of an abnormal and excessive

Clinical case - . 2003… a 30 year-old woman… ...admitted to our hospital due to obesity and diabetes mellitus.

Clinical case - . an adult cow suffered from diarrhea and hair depigmentation, specially around the eyes with pale mm.