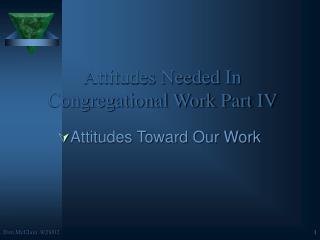 Attitudes Needed In Congregational Work Part IV. Attitudes Toward Our Work. The right attitudes are ABSOLUTELY necessary... . As we work together -. Talent and Knowledge Alone Not enough!!. Effects of our service to the LORD!!. Our Attitudes Toward God – Ourselves – Others –

Work Ethic - . learning objective: students will learn about work ethic and be able to identify and demonstrate good

THE PROBLEM OF SIN Part 2 - . the problem of sin. a) some attitudes towards sin. this is the keynote of our study-what is

Getting Launched part I - . the writer must be in it; he can’t be to one side of it, ever. he has to be endangered by

SELF ESTEEM - . objectives. ps:a1 acquire self-knowledge ps:a1.1 develop positive attitudes toward self as a unique and Reframing attitudes toward student work - . teaching writing as a process. familiar refrains. “why can’t these

POSITIVE ATTITUDES AT WORK - . attitude: the key to success. project a positive image. a professional image includes: a

Ms. Lisa Katzenstein, 2008 - . . the following is a powerpoint presentation that has been modified to a version suitable

ATTITUDES - By the end of this session you will -. be able to explain what attitudes are and understand their origins

Attitudes Toward Our Work as a Congregation - . we should be grateful for the privilege of working in the kingdom of the

Attitudes - . an attitude is a positive, negative, or mixed reaction to a person, object, or idea. attitudes can be based